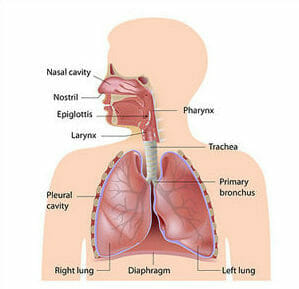 The role of the respiratory system is to deliver oxygen to the body and to remove carbon dioxide. This is achieved through breathing. There are many different parts of the body involved in breathing including the mouth, nose, trachea, lungs, and diaphragm. Oxygen is inhaled through the mouth or nose to pass down the trachea (sometimes called the windpipe) to enter the chest cavity. Here the trachea splits into bronchi separately on the right and left side. Bronchial tubes split further and further until they end in very small air sacs called alveoli. Each of the many millions of alveoli is surrounded by tiny blood vessels into which oxygen passes to be transported around the body. Carbon dioxide meanwhile is transported from the veins to the alveoli to be breathed out.