What is chronic obstructive pulmonary disease?

Chronic obstructive pulmonary disease - commonly abbreviated to COPD - is a chronic inflammatory disease of the lungs which causes an obstruction of the airflow. COPD is usually the result of long-term exposure to irritating particles or gases, including from cigarette smoke. People with COPD have an increased risk of developing lung cancer, heart diseases, and a range of other conditions.

Conditions such as chronic bronchitis, involving the inflammation of the bronchial tubes, and emphysema, involving the damage to the alveoli, situated at the bronchioles (small air passages), can contribute to COPD.

Symptoms of COPD don't typically appear until there is major lung damage. They usually get worse over time, especially for those who continue to smoke.

Common COPD symptoms include breathlessness, particularly during exercise; tightness in the chest; wheezing; a chronic cough that can produce sputum (mucus) and be various colours; lack of energy; weight loss; swelling of the legs, ankles or feet; and regular respiratory infections.

People with COPD can experience flare-ups which last for several days, during which symptoms can worsen.

The most common cause of COPD is cigarette smoking. COPD can also occur when people are exposed to burning fuel fumes, especially in homes that are poorly ventilated. Long term smokers with COPD can have a reduced lung function.

There are lung conditions less common than COPD which might develop in smokers and can be misdiagnosed. For this reason, it is important for a thorough assessment to be carried out.

Risk factors of COPD include smoking or being exposed to tobacco smoke; having asthma; exposure to burning fuel fumes; exposure to chemicals fumes, dust and vapours; and having an alpha-1-antitrypsin deficiency, which is a rare genetic disorder.

COPD is usually diagnosed via assessments such as a chest x-ray, a lung function test, arterial blood gas analysis, or a CT scan.

It is common for people to have a mild form of the disease, for which little treatment is needed, aside from stopping smoking. Symptoms can be controlled when the disease is more advanced, in order to slow its progression and improve quality of life. 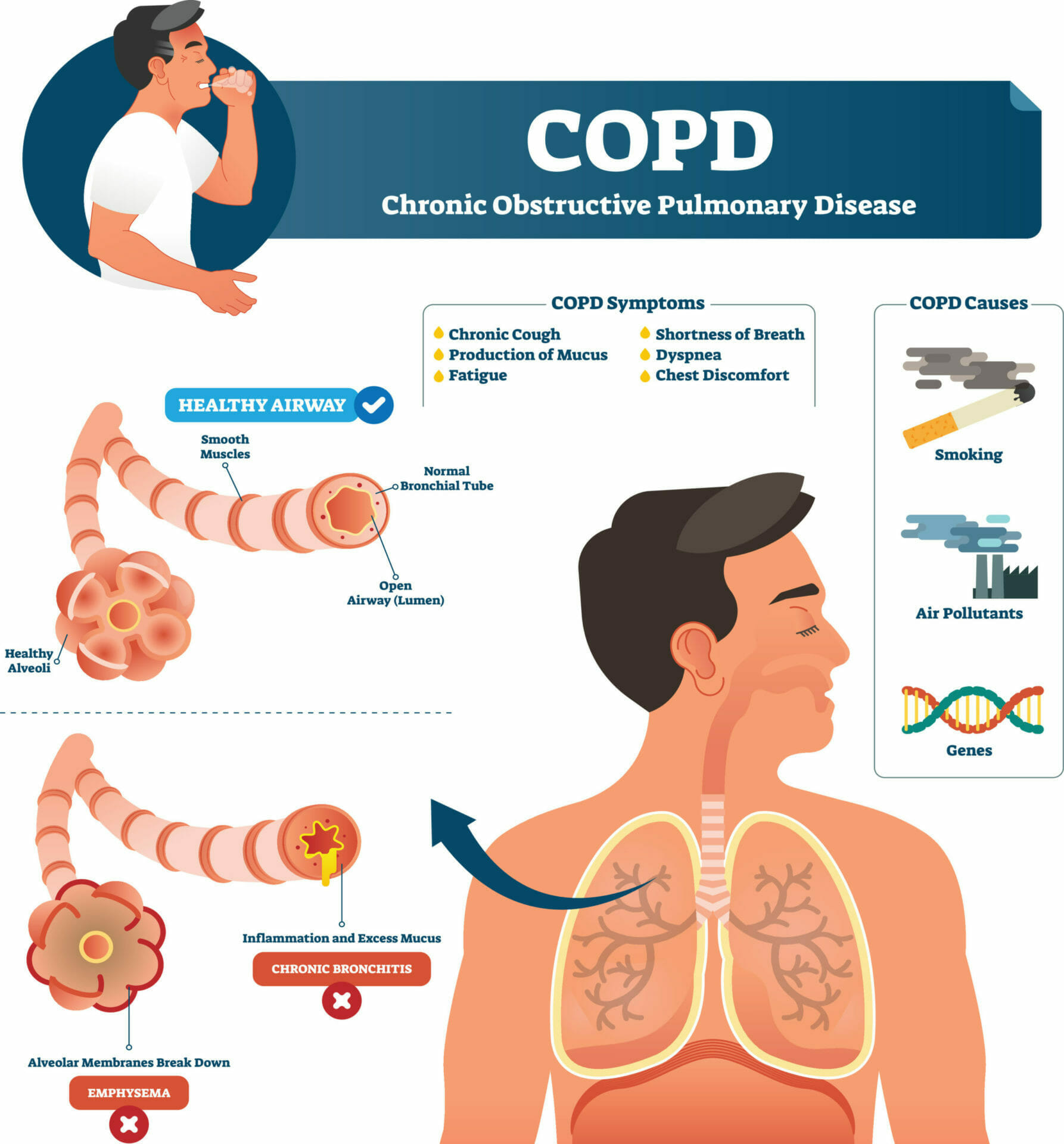 The main treatment options for COPD are:

Quitting smoking is the single most important course of action for those with COPD, preventing the disease from getting worse. Medications and replacement products such as nicotine patches and chewing gum can be recommended.

Medication, including bronchodilators in inhaler form, which are effective in relaxing the muscles around the airways, making breathing easier; inhaled steroids; phosphodiesterase-4 inhibitors for those with severe COPD and chronic bronchitis symptoms; theophylline; and antibiotics to treat respiratory infections which can aggravate the symptoms of COPD.

Lung therapies such as oxygen therapy, if the oxygen level in the blood is low; and pulmonary rehabilitation programmes, which combine exercise training and nutrition guidance with counselling.